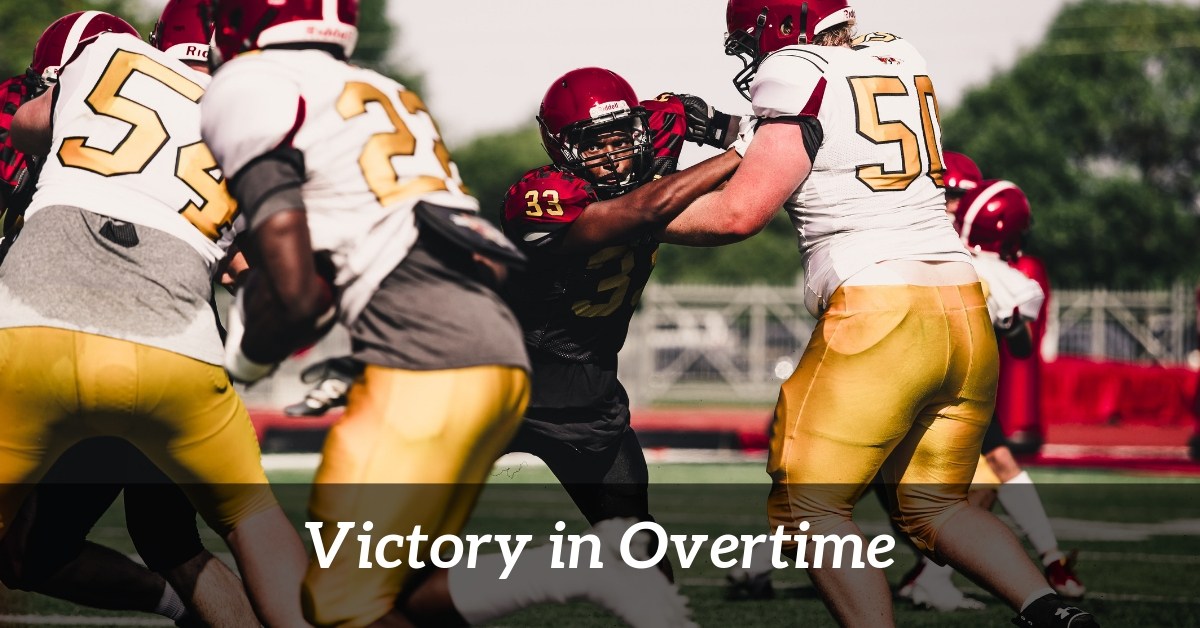 Then Elijah said to Ahab, “Go get something to eat and drink, for I hear a mighty rainstorm coming. So, Ahab went to eat and drink. But Elijah climbed to the top of Mount Carmel and bowed low to the ground and prayed with his face between his knees. Then he said to his servant, “Go and look out toward the sea.” The servant went and looked, then returned to Elijah and said, “I didn’t see anything.” Seven times Elijah told him to go and look. Finally the seventh time, his servant told him, “I saw a little cloud about the size of a man’s hand rising from the sea.”Then Elijah shouted, “Hurry to Ahab and tell him, ‘Climb into your chariot and go back home. If you don’t hurry, the rain will stop you!’” And soon the sky was black with clouds. A heavy wind brought a terrific rainstorm, and Ahab left quickly for Jezreel (1 Kings 18:41-45).

Victory for the Aggies

The day was Saturday, November 24.  The football team of Texas A&M was playing against Louisiana State University (LSU). The last time the Aggies (Texas A&M) had beaten their rivals LSU, was in 1995.

So, the stakes were high, and LSU seemed to have almost won the game in the final moments of regular time, but that did not happen. The game went into seven overtimes with the Aggies coming out victorious with a 74-72 score!

This became the highest scoring game in college football bowl subdivision (FBS) and the longest overtime game in history. This game was important to the Aggies because it was their first ever SEC win over LSU and a needed win for their new coach Jimbo Fisher.

As an Aggie fan, I stayed up to watch the game but went to bed minutes into the 1st overtime when it was almost evident that LSU would win. So, it was with great shock that I received the news of the Aggies victory when I woke up the next morning.

How could a team that was losing come back to take the victory, and only after they had played seven overtimes?

Travail till you Win

In 1 Kings 18, we learn of the famine that had resulted from a severe drought- a drought that was the direct result of Elijah’s proclamation that there would be no rain in the land of Samaria for the next few years (1 Kings 17:1).

God then told Elijah to present himself to Ahab, saying that He would send rain on the land again. Elijah obeyed and told Ahab “go, eat and drink for there is a sound of a heavy rain”(1 Kings 18:41).

But before the rain came, Elijah had to go up mount Carmel and pray. Seven times he sent his servant to go look for any sign of rain. Six times, his servant returned with this response “there is nothing”. How tough that must have been.

You see, Elijah’s proclamation of no rain had come to pass. So, his word, his reputation as a servant of God, and his life was at stake if his second proclamation did not happen as he said it would.

Every time his servant came back with the report that there was no sign of rain, Elijah could have questioned the word God gave him. He could have given up on the possibility that his proclamation would happen and try to run away before anyone noticed, but he did not.

Instead, he did what the Aggies did in their game against LSU- he continued to believe. He sent his servant again and again until his servant returned with the good news- “ a cloud as small as a man’s hand is rising from the sea.” (I Kings 18:44)

Victory is Certain if you Don’t Quit

What’s your own situation? Have you received several “noes” from employers?  Have you tried so many times for the fruit of the womb only to receive the disappointing news again that the IVF treatment failed?

Did the doctor’s report tell of a spread of cancer for the fifth time? Whatever the case may be, we are encouraged to keep fighting till the very end.

2 Chronicles 15:7 tells us to be strong and not to give up. You see, no one can truly predict when we will gain the victory over our circumstances. The only thing we can be certain of is that we will be victorious because the Bible says so (Galatians 6:9).

So, if we are sure of victory, why stop trying after the first, second, or third failure? Just like Elijah and the Aggies persevered till victory was theirs, God is calling us all to keep fighting. Even if we have to go seven times or more, let’s stay in the fight till victory is sure!

What battle are you fighting presently? Please share with us. Let us know if you are still in the fight and if you’ve gotten the victory, how long it took.